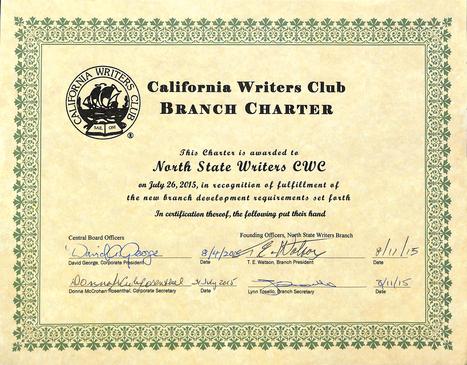 Soon, that group adopted the name “CAPS” (Chico Authors and Publishers Society). After about two years of meetings, the group embarked on the path to attain branch status with the California Writers Club (CWC); the CWC was incorporated in 1913, making it one of the nation’s oldest professional clubs for writers.

A committee was formed, which—after elections—became the governing board, and the club was organized as North State Writers (NSW).

Chapter Charter
Mentored by Margie Yee Webb, chairwoman of the CWC Branch Development Committee, North State Writers was presented with its Charter Certificate, and formally became a branch of the California Writers Club on September 21, 2015.